She bore her soul.

Still looking for your song? Look no further,  it is there, in the sun. 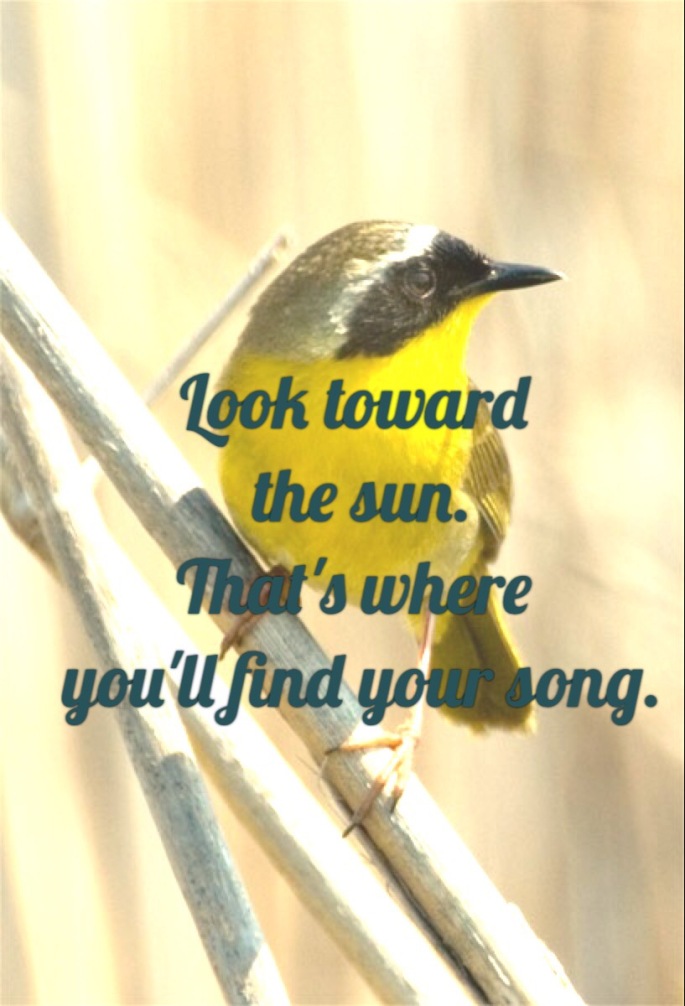 She looked downward, as if that could hide the tears that were about to fall.

She reached and put her hand on her heart to calm its racing.

He knew what to do.

He rose to join her.

His long stride quickly reached her side.

He gently put his arm around her.

They both smiled as their eyes met.

She returned to the task at hand with him by her side.

She still cried but she knew she could go on.

They both knew she could have done it without him there too, of course.

She did not need him.

She loved him, and there’s a difference.

They were stronger together.

They would never need to question.

And they always would.

The sun shone through the time-streaked bay windows in the small chapel, appearing to reflect directly off the lawn’s morning dew upward to light the room. The space was cramped and decorated, if you could call it that, with only in browns and other shades that appeared to have transformed in the way aged pages yellow.

Dust particles danced in the sunlight.

A small upright piano stood in the center of the room, appearing out of place in the barren room. A few folding chairs, a small makeshift podium, and a bouquet of plastic flowers were the only other items in the room.

“So depressing,” she whispered to herself as she set up her music.

He had left this place nearly two years ago but it looked just as it had when she last said goodbye. She shuddered thinking about it, but still she’d agreed to do this. She had a feeling he’d want her to. Papa always loved to hear her sing.

She made a final mark on her sheet music and set the copy out for the accompanist before she sat down to wait and collect her thoughts. Eyes closed, as in meditation, her silent prayer called on the pure loving universe to fill her with the spirit of love and compassion, for her song to reach all the way to her dear papa, wherever he may be, and for her soul to be filled by His love as she sang His praise.

The room had begun to fill. Wheelchairs rolled in one at a time with the frail and infirm beginning to form an audience. A few residents made it in and slowly found a seat on their own with little support. She realized how long this was going to take and knew she could never just sit there as they all began to fill in to see her.

“Well, of course, they’re not here to see me,” she thought. Shaking her head with a smile she stood to begin mingling. “They’re here for their church services, for time out of their rooms, for a chance to sit in the sun. …not unlike me, really,” she concluded.

Several smiles, handshakes, and a few hugs later, they all joined in prayer and gave thanks for their time together. They listened to words of hope and thanksgiving. There was no lesson. There was no admonishment. There was only love.

Her heart was full by the time she stood to sing. And it was magical.

“Oh Lord my God, when I, in awesome wonder, consider all the worlds Thy hands have made,” her voice carried and seemed to lift beyond her. She would never be able to explain it but it was more than her voice. She was only the vehicle.

“I see the stars. I hear the rolling thunder, Thy power throughout the universe displayed… .”

Bright blue eyes met hers with a steady gaze as the chorus began. An unspoken agreement was made and soon the two of them were singing in unison.

The sun had completed its ascent and its light now filled the room. She could not help but smile as it warmed her skin. She felt so alive.

“Then sings my soul, my savior, God, to Thee. How great Thou art!”

She was transported, some sort of electrical current seemed to enfolding and uplift her. Everyone was signing by the final chorus, even those who’d seemed unable to speak as she’d mingled earlier. She’d never experienced anything like this. All voices commingled in joyful shouts of acclamation. And those bright blue eyes reminded her so much of Papa.

Now, years later, she recalled the tears and joy as she held the little box of thank you’s they’d sent the next day.

“How can I get that feeling again?” she wondered. But she knew. So she prayed that her soul song be one of love and compassion on this day that it might reach all in need. And she felt the sun warm her skin. He was with her.